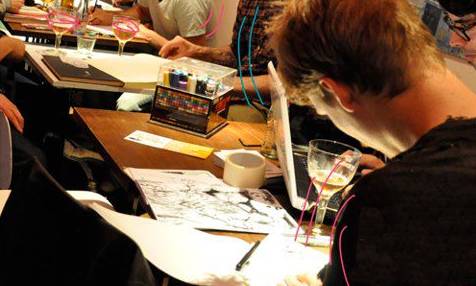 A Song Called City is ‘an epic tale of modern magic’. It is the story of a girl who slowly discovers there’s more to the world than we’ve been told in school. It is the story of an old shaman, who isn’t seeking an apprentice — but well, you don’t always get to choose, do you? It is the story of a city and its people, their everyday lives and extraordinary souls. It’s about magic, death, sex and life. It’ll be around for a couple of years. It’s an online comic, updating twice a week — and you can start reading it here.

Rik Willemen (the author) is a sort-of-young person who draws pictures. He’s also an art teacher, giver of workshops and freelance illustrator. But first and foremost, there’s a need to tell stories burning deep within his heart (and ego). A Song Called City — its artwork, the characters, the story — is the main pulsing vein in his day-to-day life, and an oxygen-rich vein it is.

A Song Called City is now a solo-project, but used to be a product of Rik’s co-authorship with Bram Michielsen — a word-smith by craft, who maintains a busy twitter feed.